Time to Weigh In 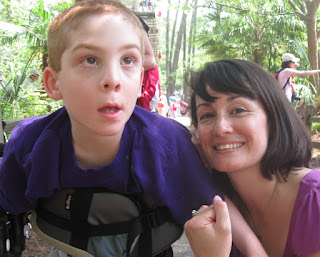 When your child has seizures, it opens up a new can of worms. Finding the best medicine with the least amount of side effects and then getting the dosage just right is only the first part of this adventure. Bodies and brains constantly change making it possible that medicine and dosage may not remain the same for any significant amount of time. Staying current on seizure management involves charting seizure activity, doctor visits and vigilant observation.

Two months ago I  noticed Ben's head dropping. This is his outward way of showing seizure activity. The head drop is worse if there is a table or bathtub in the way - bruises and bumps on Ben's eye and chin are common. I would see it once and then not again for a day or two. I was disappointed because I knew that Ben was at his maximum capacity for the dosage of this particular medicine. And this medicine had virtually no side effects for Ben. I watched Ben's behavior and noted what I saw, ready to talk about it with his neurologist.

At the doctor's appointment, Ben was weighed. It was a big shock - Ben was 10 pounds heavier than what we thought. He had gained 10 lbs in 6 months. Who knew peanut butter smoothies could pack on the pounds? This explained a few things - his dosage was not enough for this weight and that's why his seizures were breaking through. This was easily fixed by adding a few more pills to his daily dose. No change in medication was necessary.

Another mystery was solved. We all thought Ben had gotten bigger and I knew he seemed heavier, I just assumed I had gotten weaker since my medical maladies prevented me from working out over the past 6 months.

I am also much more relaxed about how much and when Ben eats - I know he is growing and gaining weight. He has not gotten chubby or fat by any means. He is growing taller and his body seems to be filling in - legs, arms and shoulders are becoming more substantial.

Ben and I gained weight together since September. I recently started Everyday Health, a free online food and exercise journal. Plug in your current weight, goals, height, age and activity level. The program gives information about how many calories may be eaten during the day to lose a pound a week, remain the same or gain one pound a week. I chose to lose a pound a week and supplement with exercise. So far, I am down 7 pounds in under three weeks! Hopefully this trend will continue - as I lose, Ben will gain.