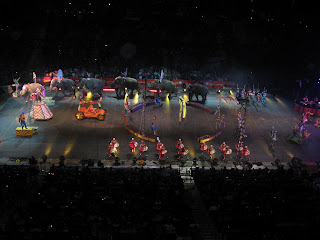 It has been two years since we last went to the circus, but with coupons in hand, we were not going to miss Ringling Brothers and Barnum and Bailey Circus this year.

This was Ben and Logan's third time, but Sean's first time seeing the circus. I love the circus, but seeing the boys so excited was a thrill - that whole seeing things again for the first time through your kids eyes phenomenon. According to them, we had the best seats, the guy on fire was their favorite part and Sean now believes elephants exist. 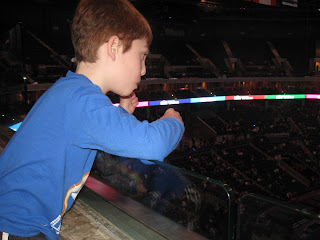 To my surprise, on the way to the arena, Ryan picked the kids up, one by one and let them look over this big wall. The secret - this was the behind the scenes of the circus. We had a good view of the white tigers. I even got a heave-ho over the wall to see.

Our seats were on a higher level, and the first in the row so we had the wall right in front of us. It helped because Ben was not distracted with people directly in front of us - meaning he did not have people to bug. I did not plan this on purpose, but will next time.

Ben stood for the entire first half - enthralled with the lights, music and action. During the second half, the attendant allowed us to sit in the handicap seating with Ben's wheelchair. Ben's attention was completely on the show. At one point, I put my hand on his leg to say hello, and he pushed it away. 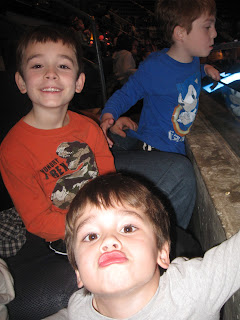 I noticed more kids with special needs at the circus. Ben saw a classmate from last year and I noticed another kid too. As businesses make it easier for parents to take kids out who have special needs, I think families will venture out more often. I know our attendant was so helpful with stowing Ben's wheelchair when we did not need it and then finding an alternate place to sit when Ben's legs gave out and he needed a more stable place to sit.

During our ride on the elevator, a circus employee gave us 50% off coupons for next year. I am already making plans.