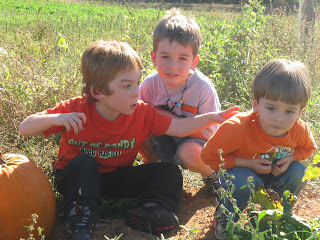 On Sunday we went pumpkin picking at Riverbend Farm in Midland, NC. It was our 5th year visiting this same farm. It features the usual activities like animals, pumpkins, hay rides and photo opps on tractors, but it also has something a bit different – slides made from old silos. And the slides are high and slick, making the ride fast and furious. I usually avoid them because they are a bit too fast for me.This year, I helped Ben up the stairs, but that meant I had to go down too. Ugh! 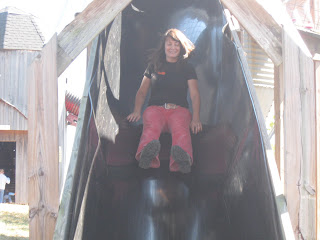 As we drove up this year, we saw it was even more crowded than years past. We stopped to ask where we could go for handicap parking. They showed us to a spot near all the action. After we unloaded, a woman came running up to us. In my guilt ridden mind, I thought she was going to tell us we could not park there. But instead, she introduced herself as one of the owners of the farm and told us that if there was anything we needed, to let her know. It was said with such sincerity and kindness, it left both my husband and I feeling so welcomed. That old saying, 'we felt touched' would be an appropriate way to explain the warmth we both felt inside. 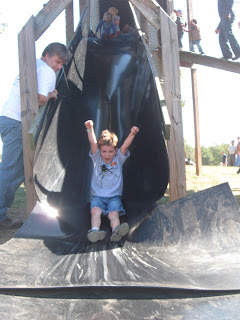 Words of kindness really do go a long way.