Mercy, Salvation and Brushes with Fame 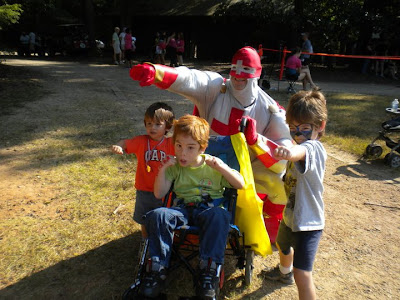 This weekend I ran my ninth race of the year - Run for Mercy - at Reedy Creek Park. It was a 5K trail race, organized by an international organization, Mercy. They raised over $21,000 for the local chapter. If you are not familiar with this organization, check it out. They do amazing things for girls in crisis world-wide.

And they also know how to plan a race. With "door" prizes, kid games, a fun run, kind-of superheroes (Captain Salvation, Monkey Joe and the Cow from Chick-Fil-A), food and drinks, the race was a true family event. The race was well-orchestrated with water available on the trails and volunteers directing us at every turn. I have been running these trails with a friend so I was prepared for the terrain.

The best part of the race was Ryan and the three boys cheering me on. It was a big boost to know that they were waiting for me at the finish line.

The kids took part in the Fun Run. Sean ended up running way ahead. He rounded the bend and the trees blocked my view of him. Luckily Captain Salvation was there to save the day. He (and his wife) offered to take Ben for me so I could catch up to Sean.

We ended up taking photos with Captain Salvation - who was wonderful with the boys. He suggested that I enroll Sean in some sports because he ran so well. That's nice of him to say, I thought at the time.

Captain Salvation's wife promised to send me the photos through her husband's Facebook account. Later, on Facebook, I found out just who that masked man was - Shane Burton, a former defensive tackle football player for eight years, two of which were with the Carolina Panthers. His comment about Sean needing to enroll in sports carries a lot more weight now.