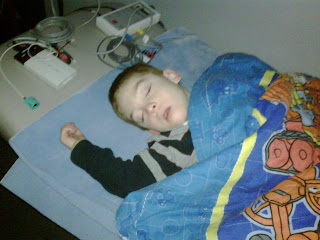 Ben awaiting his ABR.
Based on an ABR (Auditory Brainstem Response) Ben had when he was 2 1/2 years old, we were told that his hearing in his right ear was poor - he could not hear anything below 90 decibels. Regular conversation is at 55 decibels. With good hearing in his left ear, he could compensate.

When I found the new ear, nose and throat doctor's office last summer, I decided to retest Ben's hearing. After initial testing, it seemed that Ben's equipment - ear drums, etc. - all worked well. A sound booth test is hard to do with Ben because he is not able to speak or point his answer. Another ABR was the only alternative.

Ben's ABR was done yesterday. In order for the audiologist to perform the test in her office, Ben had to be sleep deprived the night before so that he would quickly fall asleep with a mild sedative.

My plan involved keeping Ben up until 1am and waking him at 6am. My friend and I brought Ben to a 9:30pm showing of Avatar, and kept him awake with popcorn and a 32oz Wild Cherry Slurpie. Not sure if it was the time of night, the task at hand or all the blue people, but it was a long, drawn out experience. Thank goodness my friend was there - I would have given up by 9:35pm.

At 6am, my husband woke Ben up, took him to breakfast, then to the test. I make it sound simple here, but let's just say Ben was none too happy being woken up at that unGodly hour of 6am and let everyone know it.

In the end, Ben was given a clean bill of health - both ears hear fine. Yes, you heard me right - sorry, could not resist!