A Grandma's Perspective: Child with 5p- Brings Out the Best in Family

My name is Gee or Grammy depending on which grandchild you ask. I have been blessed to raise two daughters and have five grandchildren, four boys and a girl, all under the age of six. Our oldest grandchild, Graham, was born with a rare genetic disorder called Cri du Chat or 5p-. It is a deletion on the p arm of the fifth chromosome.

During the first few months of Graham’s life, we began to pick up on small clues that there might be something amiss. My daughter fought to be referred to specialists and to get some therapies started.  Graham was missing some milestones. Two of the biggest issues were feeding difficulties and sleep.  After receiving genetic counseling, we finally got a diagnosis at about seven months old. This was one of the worst days of my life.

It helped me see that one of my most important roles in being a grandparent to Graham was to be a parent to my daughter. Graham was receiving the care he needed from his other grandmother and aunts. I focused on caring for Christina. She was already suffering from postpartum depression and, finally knowing, shook her and her husband. It is devastating to see the hopes and dreams that you have for your child be pulled out from under you in three small words. I wanted to show her how strong she is. She is everything Graham needs and more.

One of the toughest days was when Christina called me at work asking how fast I could get to her house. I don’t think I’ve ever moved so fast. When I arrived, Christina was sitting on the front steps. She just needed to cry and be held. Another day, she was having trouble getting Graham to take a nap. She had rocked and bounced as long as she could and was exhausted. I went in and rocked and sang to him. He was asleep in a few minutes. Graham could sense his momma’s stress. Christina and her husband, Brandon, asked my husband, Tim, and me to move in with them at about nine months. We stayed with them for about a year and a half.

We refuse to listen to what the experts say about Cri du Chat. It is all negative and very scary. We want to allow Graham to show us what he can do. He is determined, resilient, and loving. I love his kisses and cuddles. His giggle is infectious. His younger brother and baby sister adore him.

My husband is tremendous and completely devoted to his family. Before Graham started school at the age of three, Tim would keep him on his days off so mom and dad could continue to work. Tim does what he calls PT, Pop Therapy and works with Graham to help build his strength, confidence and abilities. He attended actual physical therapy, occupational therapy, and feeding therapies to learn about supporting him. Now, he picks up Graham from school twice a week. His other grandmother picks him up two days a week. We work together as a family to make sure Graham gets the care he needs.

Graham is now six years old and is able to have table foods. He takes a few independent steps when he wants.  He is mobile by walking on his knees. He is vocal but does not talk. We pray that all of this will continue to improve. We have learned to celebrate each accomplishment and say that Graham is crushing “inchstones.” 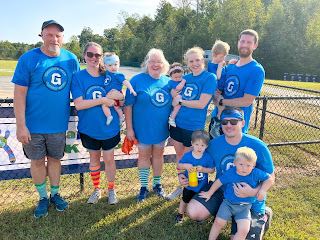 Our family are all advocates for Graham. We host a 5k for 5p- each year. He has a beautiful community called Graham’s Gang who support him and his family. Graham was able to bowl with a special needs league and is playing baseball with the Miracle League. I try to attend every event. We work hard to make Graham’s life as typical as possible.

Beyond Graham, I have learned that one of my roles is to make sure the siblings and cousins feel special too. We love having them spend the night. We give them all one on one attention and they are pretty spoiled. Tim and I babysit for both families as often as we can so the parents get mom and dad time.

I hope that I have conveyed that being a grandma is multifaceted. I know that my role will change in the future. To other grandparents, find your place in your grandchild’s life. I met a grandma on Saturday who is the sole caregiver. We each have a part to play and we need to adapt as we move through the years. I started out needing to parent the parent. While this will never end, now I get the joy of focusing on being a grandma.