Throwback Thursday: Sleepless in the Carolinas 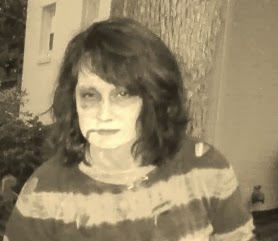 This was first published in 2013 and unfortunately, we're having some of the same behaviors again. Ben's been waking at 2 a.m., not knowing exactly what he wants and where he wants to be. On some of the worst nights, he moves from his bed to the couch to the refrigerator, then to his favorite armchair and back to his bed again.
This takes at least an hour and I am following behind him as he makes his way. It would be unsafe to leave him to his own devices in the middle of the night.
Since this post in 2013, we have charted Ben's sleep, daily routines and behaviors. We've noted that he wakes 10-15 times a night each month. It doesn't seem related to how much activity he's had during the day or what food he's eaten.
Many families with a child with a disability face sleep issues. Sleeping pills, essential oils, solid bed routines and begging our child to sleep don't seem to work all the time. If you see us walking around, looking like zombies, this could be the reason why. Just side step us so we don't bite off your head. 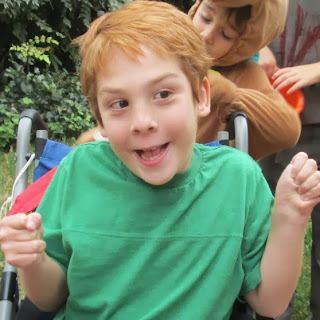 Not sure if my itchy Zombie head or Ben's screeching kept me up most of the night following Halloween. I took a shower at 4am to relieve the itching (Note to myself: Shower after a Zombie night) and when I came out, Ben seemed quieter. I did not dare hope he was asleep, but at least quiet for a bit.

For many years now, Ben wakes anywhere between midnight and 3am and does not go back to sleep no matter what we try. His prescribed sleeping pill and melatonin have absolutely no effect on him on these nights. Even if we increase the dosage based on doctor's recommendations, Ben is unable to sleep.

I have not charted it, but my best estimate is that it happens about once a month to every six weeks. It could last two or three nights in a row.

It does not seem to be affected by what Ben eats, change in routine or amount of physical activity. All in all, it does not influence his behavior or abilities the next day either. After a night of no sleep, I have had the teacher tell me he has had a great day, and sometimes she has said, he has had his best day yet. Certainly, he does not take after his parents in this area.

Ben's behavior during this wakeful time is happy and active; he may crawl around the house or he may stay in his bed and watch a video. If he is feeling mischievous, he will crawl into bed with Logan. No matter what, he is loud. When he watches a Bob the Builder video, his laughter is almost maniacal. He cackles like he is having the time of his life.

When I am not corralling him to his bed, making a smoothie or changing a pull-up or video, I try to catch short naps. His jolts of laughter in a very quiet dark house are enough to wake the dead, but fortunately, brothers and Dad usually sleep through it all.

We are not sure what this sleeplessness is caused by - seizure activity is my best guess. It would be almost impossible to schedule an overnight EEG during one of these times unless we were certain of a pattern. I did write in my calendar the date and times he was awake this last time. Perhaps if these bursts of energy are caused by seizures, then additional medication could be given to him on these nights.

A solution to this would be wonderful because after two or three nights of this, I don't just play a Zombie on Halloween, I become one of the walking dead for real.