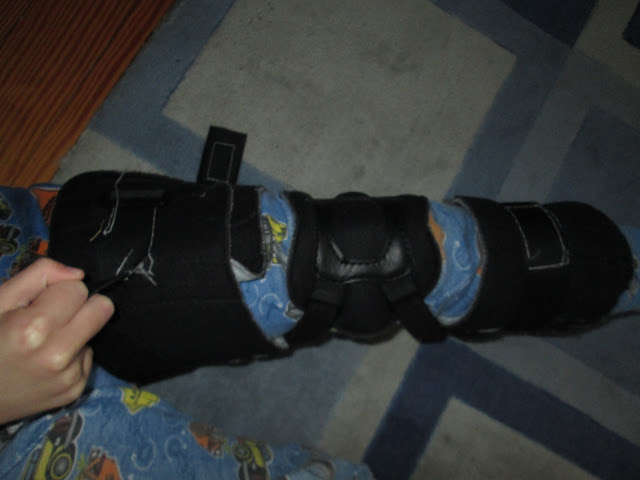 Ben wears this brace on one of his legs almost every night. It was made by KMO - Knee Management Orthosis. Its purpose is to stretch Ben's hamstring muscles.

We wait until Ben is asleep before we put it on because it does limit his movement. Imagine your leg in a cast and you cannot bend at the knee - that's what it feels like for him. Combined with his new ankle foot orthotic braces, Ben is standing up straighter when he walks and his heels are striking the floor when he makes a step.

Ben manages to still get around with this brace on. On too many occasions, he has gotten out of bed, opened the door to his brothers' room and crawled up into bed with Logan, effectively waking up the entire household. This is all done with one leg in the brace.

If Ben senses that we may try to put it on him, he pulls his knees tightly into his body and it takes strength and emotional toughness to get that brace on him. We know it is doing him good, but we still feel bad when it happens. He had Christmas Eve and New Year's Eve off from the dreaded brace, and since he has pulled on it so much, it is actually "at the shop" getting a little work done, so he has more time off from it.