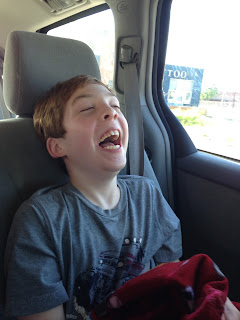 This is a photo of Ben after he met a new friend today. Ben giggled the entire time he was with his new friend.

We were connected with the "Z" family a few months ago when we were donating a piece of equipment. A school physical therapist connected us, but we only met the dad that first time. He mentioned that their son seemed similar to Ben.

We finally met today at a local park and Ben and "D" were strangely similar in their abilities, habits and history. Ben was in love with the whole family, including their dog. Ben was interested in D and tried to interact with him. It was fun to watch Ben "make a friend." I see us spending more time with them - Ben's judgment of people is usually spot-on.