October 13, 2014
In April, Ben received his long awaited larger Convaid Cruiser, a portable and light-
weight wheelchair.  Within a month, the canvas seating began to fray on the corners and Ben pulled off one of the crucial straps for buckling after it frayed beyond repair. Both were quickly replaced by the distributor, the sales company that purchases the products directly from Convaid.

Within days of those repairs, the brake broke and a bolt came loose from the handlebars. Again, the same technician from the distributing company came out and handled the repair. His general diagnosis about the continual repairs was that the chair was put together too quickly, probably on a Friday afternoon.

On a "it is a small world" side note, the technician had an unusual last name and I commented that I was friends with someone in high school by the same name.  He doubted this because very few families in the world shared this surname. After a careful game of who, what and where, we confirmed that he was first cousins with my friend from high school.

Within a few weeks, Ben's Brand new canvas seat began to fray again. Then our family went to the beach and while Ben and I strolled on the sidewalk, the wheel completely came off the chair.  It took me a minute to realize what happened because we were suddenly lopsided. Luckily, Ryan was a quick walk away and came to our rescue. After some serious phone calls to several people in the company, a technician came to the hotel at the beach and patched up the broken wheel baring. It was not a permanent fix, but If we were careful, it could work for the short while we were on vacation.

Throughout the four months of breakdowns and repairs, I stayed in contact with our salesman who was responsive to each issue.  By the time the wheel came off because of a broken baring, I knew that either a new chair or a complete overhaul was needed. This was Ben's second Convaid chair so we knew that the product was a good one, just somehow, Ben received the proverbial lemon. 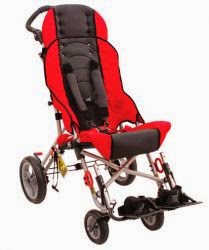 Our salesman contacted the Convaid company to see how to handle this situation. Again, he summarized the situation, communicated with the right people, even heard back good things, but nothing happened. We were promised a demo while the current chair was analyzed and repaired.  Several weeks went by, then a month, and no demo. The canvas seating continued to fray and, I was waiting for the other shoe to drop - what would break next at an inconvenient or even worse, unsafe time?

With much frustration, I looked into the Convaid company, deciding to send emails to those who may respond to Ben's needs.  First, I found out that the company was started in the 1970's by a mechanical engineer and his occupational therapist wife, after seeing a gap in the market. Heavy and cumbersome wheelchairs were the only option for people with mobility issues. The husband and wife team designed the Convaid Stroller and started a company.

Next, I reviewed all the emails between the salesman and Convaid to see what had been offered, but more importantly, who had been copied on all the emails. I happened to find a name attached to the email that looked more authoritative than the people we were currently in contact with. I also copied my email to any people I found on the Convaid site that may be higher up in the company.

My email was informative, respectful and I received a call within three hours of sending. Ben had a demo chair the next day. By the end of that week, I knew I wanted to keep this new demo chair. It was a different model, one I had declined from the online photos during the sales process because I thought it would not work for us. Our new contact (and new best friend) at Convaid accepted my proposal to keep the demo. The damaged chair was sent back to Convaid for review. Clearly, something had gone wrong in the production.

Ben has a new chair with a larger back wheel, cushioned seating and a very cool fabric basket underneath. We have had no issues and do not expect to this time.

What I learned: People generally want to be helpful, but things fall through the cracks. Persistence, follow-through and keeping your sanity throughout the process will help get the response requested. Keep good notes and do as much communication through email so there is a paper trail With dates, names and actions. Creative solutions, thinking outside the box and getting others involved can make a bad situation better, maybe even great.