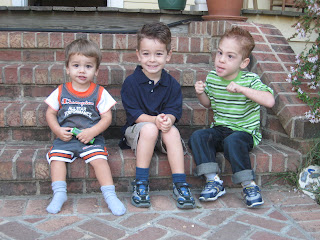 We have three boys – Ben (6), Logan (4) and Sean (1 ½). As probably any parents do, we are always amazed at how different they are from each other. But more than that, I have been shocked at the relationships they have formed with one another, but especially with Ben. The dynamics that I would expect between three typical boys are present in our house. Even though Ben is different, his brothers treat him the same.

I have been surprised by the way in which our three boys interact. Lately, Logan wants to do or have what Ben does or has. For instance, Ben made a cool art project, Logan copied it. Logan borrowed Ben’s cool sneakers from the closet and wore them around the house. He seemed to have borrowed them indefinitely, although Sean takes them every once in awhile.

Sean and Ben have a very special relationship. Sean feeds Ben food and drinks, kisses him regularly, and rubs Ben’s head. This is special because Sean has been know to hit everyone else. They both can sit in the double stroller without annoying each other, whereas Logan has a hard time sitting with either one of them. Not sure if Ben and Sean have an unspoken understanding – they are both biters.

Growing up with a sibling who has special needs carries a whole load of issues. Logan and Sean will have a sense of responsibility that most kids will not have at such an early age. On the other hand, Logan and Sean will hopefully be more compassionate caring individuals having experienced first-hand what it means to be open, inclusive and understanding. Helping them deal with the burden of all the emotional, physical and mental issues will be a part of our parenting job. They are so young now, but there will come a time where we will need to have discussions about how they feel about the situation, their role in the family and how we can help them cope.

I happened upon a Disney Movie called Soap Box Racer several years ago, and reminded myself that we need to revisit the movie when the kids are older. The movie is about a boy in a wheelchair who gets interested in racing “soap boxes.” It does an excellent job of portraying the family issues as they relate to having a child with special needs - relationship between siblings, financial issues, parents guilt, etc. True to any Disney Movie, it does have a happy ending.