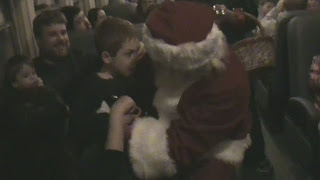 This past weekend, we visited the Polar Express on the Great Smoky Mountain Railway. The train ride is setup like the famous movie Polar Express, based on the book by the same name. The train attendants are dressed like waiters, dancing down the aisles to the tunes from the movie, and a conductor punches each child's Golden Ticket. They serve hot cocoa and a chocolate Santa and then read the Polar Express book over a loud speaker. All the time, music is playing and the train is moving slowly to the North Pole.

Once reaching the North Pole, a small town lit up for the festivities, Santa boards the train to give each boy and girl the magical first gift of Christmas, a silver bell.

Meanwhile, we were seated in a four seat space - two pairs of seats facing each other. Sean, our youngest, sat staring in awe for the first 30 minutes. It was a lot for him to take in especially because he is in love with trains right now. Logan declared "This is awesome, better than Extreme Karate," an afterschool program he hopes to join in January. Ben was really happy and excited throughout the trip - constantly vocal and not happy sitting in one place. He stood on the seat trying to reach other people, lucky for us they were Grandpa and his friend. My husband and I took turns trying to hold him. I was counting the minutes until it would all be over. My body felt beat up from trying to keep Ben situated. It is hard to describe what Ben is like when he is happy, excited, vocal and super determined to do what he wants to do. He is 40lbs of long strong limbs, a grip of steel and willpower that would put a top wrestler to shame. Add to that, his ability to not let up for one second. I am frazzled physically, mentally and emotionally when Santa gets to us.

At first Santa bypassed Ben mumbling something I did not catch and gives our two younger boys the bells while asking them what they want for Christmas. Santa stood in the aisle, leaning over, while Logan told him he wanted Bakugans and a Laser. For a split second, I was annoyed that he ignored Ben.

Then the soft spoken Santa sat down on the edge of the armrest and asked to hold Ben. I was confused at first, but then snapped to attention. Ryan and I quickly got Ben on Santa's lap, and suddenly for a few seconds, Ben got quiet and calm. Santa suggested we take a photo.

It all happened very fast, a few seconds and this moment was over. I had the forethought before Santa even came to us to ask Grandpa to videotape - so I think he got the entire event. I have not watched it yet.

I wonder if you can see me holding back my tears.
Posted by VMI at 7:00 AM